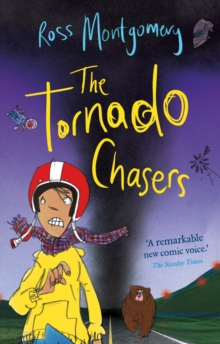 When Owen Underwood's family move to Barrow, it's because there's nowhere safer in the Valleys - and safety is very important.

Especially when the threat of tornadoes, and giant bears, is constant. But in Barrow, safety is taken to extremes. Children have to wear bright yellow at all times and are never allowed outside except to go to school.

How can Owen face an entire summer of that? In secret, Owen and his friends form the Tornado Chasers.

Their mission: to get as close to a Grade 5 tornado as possible.

It's time for them to face their fears! And then... And then... The second hilarious, thought-provoking, highly original book from an extraordinary young talent - you've never read a novel like it