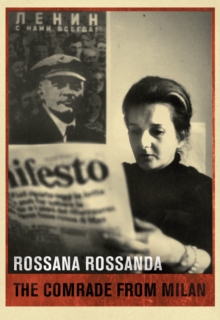 The comrade of Milan Hardback

Rossana Rossanda is one of the most important and influential intellectuals on the European Left, and was one of its key figures in the second half of the twentieth century.

Born in 1924, by 1943 she was immersed in the Italian Resistance movement.

After the war she rose quickly through the ranks of the Communist Party, becoming editor of its weekly paper and a member of parliament.

Inspired by the radicalization of the late 1960s, she became a party dissident.

She moved further away from party lines after the invasion of Czechoslovakia, helping to found the legendary periodical "Il Manifesto".

After being expelled from the PCI in 1969, she became a major reference point for the New Left in Italy and in Europe more widely.

In this beautifully written memoir, which was greeted with literary acclaim in Italy, Rossanda recounts in a cool and trenchant manner the course she travelled through these stormy and decisive years, never stooping to sentimentality or bien-pensant rhetoric. From her uniquely privileged perspective, we gain a fascinating insight into the history of fascism, communism, postwar reconstruction and the stirrings of the revolts that were to shake Europe through the 60s and 70s.