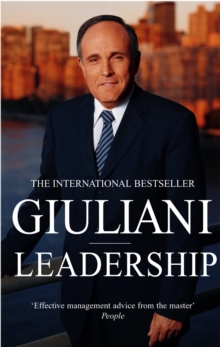 Mayor Rudoph Giuliani had barely escaped with his life in the collapse of the first tower.

Fires burned furiously near the site as the other buildings verged on collapse.

Air Force fighter jets criss-crossed the sky to ward off other attacks. And yet in those moments after the calamity, and in the following days and months, Mayor Giuliani not only steered the city through the crisis, but did so with an assurance and authority that was hailed around the world as a model of courageous leadership. In LEADERSHIP, Giuliani describes vividly the chaos and horror of the twin-towers catastrophe, and explains how the rules of management he enforced as Mayor enabled him to gain control of the emergency.

These are also the rules, Giuliani makes clear, that anyone in a leadership position - from the head of a large corporation to the owner of a corner shop - can use to inspire others and achieve concrete results.