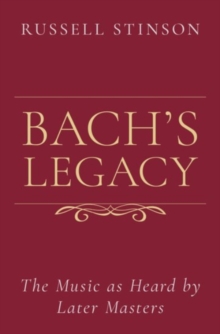 Bach's Legacy : The Music as Heard by Later Masters Hardback

Johann Sebastian Bach's legacy is undeniably one of the richest in the history of music, with a vast influence on posterity that has only grown since his rediscovery in the early nineteenth century.

In this latest addition to his long list of Bach studies, renowned Bach scholar Russell Stinson examines how four of the greatest composers of the nineteenth and twentieth centuries - Felix Mendelssohn, Robert Schumann, Richard Wagner, and Edward Elgar - engaged withBach's legacy, not only as composers per se, but also as performers, conductors, scholars, critics, and all-around musical ambassadors.

Detailed analyses of both musical and epistolary sources shed light on how these later masters heard and received Bach's music within their musical circles, whilecolorful anecdotes about their Bach reception help humanize them, reconstructing the intimate social circumstances in which they performed and discussed Bach's music.

Stinson focuses on Mendelssohn's and Schumann's reception of Bach's organ works, Schumann's encounter with the St.

Matthew and St. John Passions, Wagner's musings on the Well-Tempered Clavier, and Elgar's (resoundingly negative) thoughts on Bach as a vocal composer.

Engagingly written, copiously annotated, and thoroughly up todate, Bach's Legacy traces the historical afterlife of Bach's music and offers fascinating insights into how these later masters defined it for their audiences and beyond.