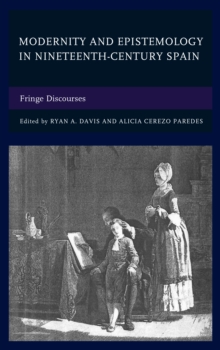 The fraught tension between science and religion has loomed large in scholarship about the nineteenth century in Spain, especially given the prominence of the Catholic Church and the discoveries made by Wallace and Darwin.

The struggle for epistemological superiority between these two discourses (science and religion) has served to overshadow certain corners of the cultural landscape that, though prominent sites of intellectual exploration in their day, have received comparatively less scholarly attention until recently.

Fringe Discourses brings together a group of essays that seeks to restore a sense of the epistemological richness of nineteenth-century Spain.

By exploring the relationship between epistemology, modernity, and subjectivity, these essays recover significant efforts by Spanish authors and intellectuals to explain human nature and their world, which seemed to be changing so radically before their eyes.

In doing so the essays also reveal just how elastic the relationship was between science and pseudoscience, genius and quackery.

Offering a veritable Wunderkammer, the authors collected here train their sights both on curious fields of study (from pogonolgy, the science of beards, to Spiritualism) and curiouser people (from a government spy on undercover assignment in Morocco dressed as a Moorish prince to a hypnotic huckster who dupes the queen regent).

With other authors focusing on science fiction dystopias, mystical journeys, and anatomical symbology, Fringe Discourses reveals the Spanish nineteenth century for the intellectual Wild West it was.