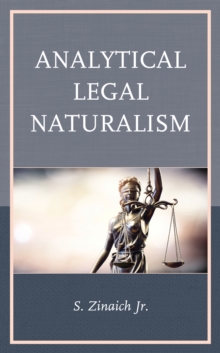 In legal jurisprudence, the phenomenon of "hard cases" presents itself as a dilemma between the legal positivists and the natural law realists.

Of the former, without the metaphysical underpinnings of an objective legal or moral standard, the legal positivists cannot supply convincing arguments to supplant the sovereign as the origin and authority of law.

It represents an analytic norm, both necessarily true and known a posteriori.

Against the legal positivists, it supplies an objective legal standard by removing--at least for hard cases--the necessity of the will of a sovereign authority.

Against the natural law realists, ALN provides a nonmoral standard which, because of its analyticity and necessity, avoids the need for metaethical speculation.

Finally, ALN provides a standard that not only supplies the universalizable punch to avoid political subjectivism, but does so in a conventional manner.

Thus, ALN does not require a moral or modal reality as truth-making characteristics.

Rather, it makes what is legally valuable or disvaluable dependent upon empirically verifiable facts that are legally relevant.