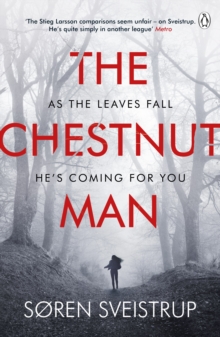 The Chestnut Man : The gripping debut novel from the writer of The Killing EPUB

One October morning in a quiet suburb, the police make a terrible discovery.

A young woman is found brutally murdered with one of her hands missing.

Above her hangs a small doll made of chestnuts.

Examining the doll, Forensics are shocked to find a fingerprint belonging to a young girl, kidnapped and murdered a year ago.

Can a new killer be the key to an old crime?

'A full-throttle thriller in the tradition of classic Stieg Larsson, drenched in atmosphere and charged with adrenaline. I loved this book' A. J. Finn, author of The Woman In The Window

'The Stieg Larsson comparisons seem unfair - on Sveistrup. He is quite simply in another league'Metro

'If you're pining for a dose of Jo Nesbo-style Scandi noir, The Chestnut Man should hit the spot'The Times

'Has success written all over it'Daily Express

'Creepy, clever and packed with tension'Sun

'If you are one of the millions who enjoyed The Killing, you'll want to read the first novel by its creator' Guardian
___________

Praise for The Killing

'TV of the absolute finest quality . . . the writing shines' Guardian

'The most talked-about, boxset-friendly cultural landmarks of the 21st century to date' Independent