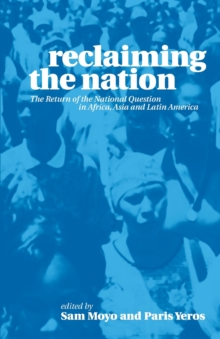 Reclaiming the Nation : The Return of the National Question in Africa, Asia and Latin America Paperback / softback

This book compares the trajectories of states and societies in Africa, Asia and Latin America under neoliberalism, a time marked by serial economic crises, escalating social conflicts, the remilitarisation of North-South relations and the radicalisation of social and nationalist forces. Sam Moyo and Paris Yeros bring together researchers and activists from the three continents to assess the state of national sovereignty and the challenges faced by popular movements today.

They show that global integration has widened social and regional inequalities within countries, exacerbated ethnic, caste, and racial conflicts, and generally reduced the bureaucratic capacities of states to intervene in a defensive way.

Moreover, inequalities between the countries of the South have also widened.

These structural tensions have all contributed to several distinct political trajectories among states: from fracture and foreign occupation, to radicalisation and uncertain re-stabilisation. This book redraws the debate on the political economy of the contemporary South and provides students of international studies with an important collection of readings.