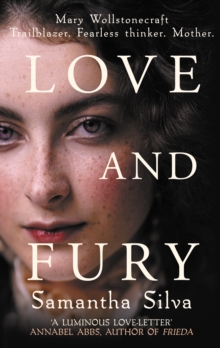 'Now, daughter, I'm to tell you a story to coax you into the world.'Justice.

Equality. Life lived to its fullest. These are the tenets at the heart of Samantha Silva's richly rendered imagining of the life of Mary Wollstonecraft; the mother of Mary Shelley, and arguably the world's first feminist. August, 1797. When Mary Wollstonecraft's labour begins on a fine summer's day everything appears normal, and she anticipates being back at her usual occupations before too long.

However, after her baby girl, her second daughter, is delivered, both mother and child will fight for survival.

In that time, Mary weaves the tale of her life to bind her frail daughter close and to give herself a reason to fight, even as her own strength wanes.

Charting the course of her life across Europe and against the conventions and restrictions of her time.

A life that urgently demanded equality for herself and all women.

A life that tempered triumph with loss. Conjuring the all too brief moment when the stories of influential mother and daughter overlapped, Love and Fury is a tribute to the power of a woman reclaiming her own narrative and passing that legacy on to her daughter.