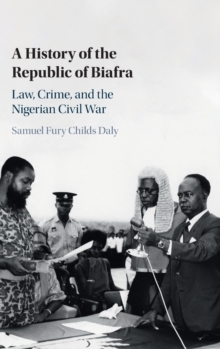 A History of the Republic of Biafra : Law, Crime, and the Nigerian Civil War Hardback

The Republic of Biafra lasted for less than three years, but the war over its secession would contort Nigeria for decades to come.

Samuel Fury Childs Daly examines the history of the Nigerian Civil War and its aftermath from an uncommon vantage point - the courtroom.

Wartime Biafra was glutted with firearms, wracked by famine, and administered by a government that buckled under the weight of the conflict.

In these dangerous conditions, many people survived by engaging in fraud, extortion, and armed violence.

When the fighting ended in 1970, these survival tactics endured, even though Biafra itself disappeared from the map.

Based on research using an original archive of legal records and oral histories, Daly catalogues how people navigated conditions of extreme hardship on the war front, and shows how the conditions of the Nigerian Civil War paved the way for the country's long experience of crime that was to follow.