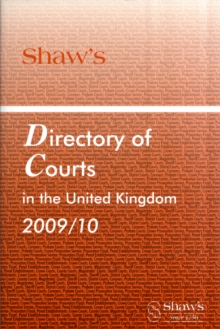 A Numerical Index enables courts to be readily identified by their Court Code number only.

This important new edition includes full details of the major restructuring of the Scottish Court Service - brought about by the Criminal Proceedings etc. (Reform) (Scotland) Act 2007 - which includes the disestablishment of local authority administered district courts and their replacement by the new Justice of the Peace courts, administered by the Scottish Court Service.

An index is included within each Region, listing every crown, county and magistrates' court under its administration by Area, court type and page reference, for ease of location of courts.

This remains the definitive source of information on courts and related offices.