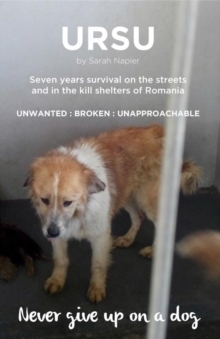 Ursu : Never Give Up On A Dog Paperback / softback

Born on the streets of Bucharest, Romania, Ursu was caught and flung into one of the country's most notorious kill shelters where miraculously, against all the odds, he survived several years before catching the eye of someone living thousands of miles away in the UK. Unwanted for the first seven years of his life, broken, terrified and unapproachable, this tells the story of how a feral and badly abused dog, already approaching his senior years, gradually learned to let go of his fears and anchor his trust in humans, the very species responsible for his years of excruciating pain and incarcerated misery.

When we think about a feral canine we likely conjure up images of a dog that has never had contact with humans, possibly living its life out in forest or open landscape, not having experienced human interaction. But the meaning of feral is `wild, untamed, undomesticated, untrained' and this was Ursu, aged between seven and nine, when he was rescued in January 2015. The saying `you can't teach an old dog new tricks' is probably one of the oldest proverbial sayings around, with citations of it going back to the 16th century relating to shepherdry and the training of dogs. A saying so commonly used in today's everyday language it should act as a cautionary warning against taking a risk on an ageing dog that had never obeyed a word of human command and indeed had grown to fear people. A dog has no idea how we want it to behave. An obvious comment given we're human and a dog is a dog, but it's easy to overlook this, unconsciously relying on the innate intelligence of a dog to do the understanding. Over time, they work out for themselves the real demands we are making of them through all our mixed messages and inconsistencies, but in reality, it's our job as humans to assist a dog to become socialised and to do this kindly and in a consistent manner. A badly behaved dog isn't a bad dog; a terrified dog even less so. Get it right, and with patience and full commitment, most dogs will respond positively. Ursu is living proof.