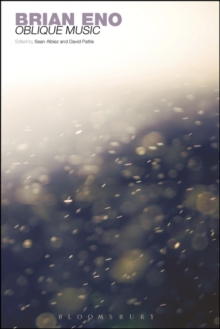 On the back of his published diary Brian Eno describes himself variously as: a mammal, a father, an artist, a celebrity, a pragmatist, a computer-user, an interviewee, and a 'drifting clarifier'.

To this list we might add rock star (on the first two Roxy Music albums); the creator of lastingly influential music (Another Green World; Music for Airports); a trusted producer (for Talking Heads, U2, Coldplay and a host of other artists); the maker of large-scale video and installation artworks; a maker of apps and interactive software; and so on.

He is one of the most feted and influential musical figures of the past forty years, even though he has described himself on more than one occasion as a non-musician.

This volume examines Eno's work as a musician, as a theoretician, as a collaborator, and as a producer.

Brian Eno is one of the most influential figures in popular music; an updated examination of his work on this scale is long overdue.