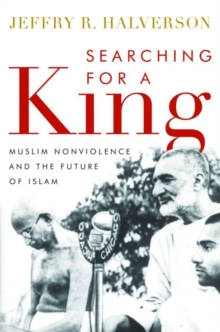 Searching for a King : Muslim Nonviolence and the Future of Islam Hardback

At a time when violent images of the Muslim world dominate our headlines, Western audiences are growing increasingly interested in a different picture of Islam, specifically the idea of Muslim nonviolence, and what it could mean for the world.

But is nonviolence compatible with the teachings of Islam?

Is it practical to suggest that Muslim societies must adopt nonviolence to thrive in today's world?

Where is the Muslim equivalent of a Mahatma Gandhi or Martin Luther King Jr.?

Searching for a King offers a comprehensive look into Islamic conceptions of nonviolence, its modern champions, and their readings of Islam's sacred texts, including the Qur'an and traditions of the Prophet Muhammad. Jeffry R. Halverson asserts that the foundation for nonviolence in Islam already exists.

He points to the exemplary lives and teachings of modern Muslim champions of nonviolence, little known in the Western world.

Using rich historical narratives and data from leading international agencies, he also makes the case that by eliminating the high costs of warfare, nonviolence opens the door to such important complementary initiatives as microfinancing and women's education programs.

Ultimately, Halverson endorses Muslim champions of nonviolence and argues for the formulation of a nonviolent version of jihad as an active mode of social transformation.