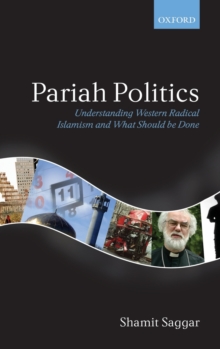 Pariah Politics : Understanding Western Radical Islamism and What Should be Done Hardback

Pariah Politics breaks new ground in examining the issue of western Islamist extremism from the perspective of government. It links underlying causes to the capacity of governments to respond directly and to influence others.

The scope to make big changes in the latter two is severely limited. The circle of tacit support. Action by government to counter terrorism has relied too heavily on security policy measures to intercept or disrupt men of violence.

This emphasis is misplaced. Though important, this fails to address the moral oxygen for violence and confrontation that exists within Muslim communities. Better focus and better levers. Ministers and officials need to think and act smart.

They need to push ahead with social inclusion policies to broaden opportunity.

They need to make more use of community-based strategies to isolate extremism. They need to promote civil society actions so that affected communities can take control of their own reputational future. And, they desperately need to avoid making things worse. Reputations matter. The pariah status of western Muslims has worsened by the fallout from terrorism. Few have anything good to say about western Muslims; still fewer can imagine an optimistic future.

Yet earlier demonised groups, such as Jews or Asian refugees, have overcome significant hurdles, moving from pariahs to paragons. A credible willingness to tackle extremism is the most important first step to a reputational turnaround.