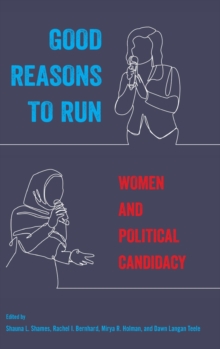 After the 2016 U.S. Presidential election, a large cohort of women emerged to run for office.

Their efforts changed the landscape of candidates and representation.

However, women are still far less likely than men to seek elective office, and face biases and obstacles in campaigns. (Women running for Congress make twice as many phone calls as men to raise the same contributions.) The editors and contributors to Good Reasons to Run, a mix of scholars and practitioners, examine the reasons why women run-and do not run-for political office.

They focus on the opportunities, policies, and structures that promote women's candidacies.

How do nonprofits help recruit and finance women as candidates? And what role does money play in women's campaigns? The essays in Good Reasons to Run ask not just who wants to run, but how to activate and encourage such ambition among a larger population of potential female candidates while also increasing the diversity of women running for office.