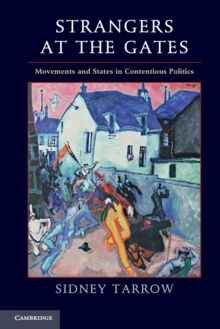 Strangers at the Gates : Movements and States in Contentious Politics Paperback / softback

This book contains the products of work carried out over four decades of research in Italy, France and the United States, and in the intellectual territory between social movements, comparative politics, and historical sociology.

Using a variety of methods ranging from statistical analysis to historical case studies to linguistic analysis, the book centers on historical catalogs of protest events and cycles of collective action.

Sidney Tarrow places social movements in the broader arena of contentious politics, in relation to states, political parties and other actors.

From peasants and communists in 1960s Italy, to movements and politics in contemporary western polities, to the global justice movement in the new century, the book argues that contentious actors are neither outside of nor completely within politics, but rather they occupy the uncertain territory between total opposition and integration into policy.