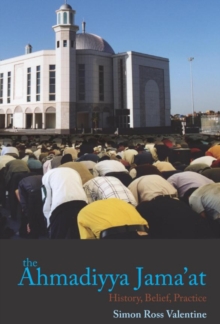 This book is the first scholarly appraisal of the teachings, beliefs and lifestyle of the Ahmaddiya Jama'at, an Islamic reform group founded in nineteenth-century India that has millions of follows worldwide.

To the great annoyance of other Muslims, the Ahmadis claim that other prophets followed the Prophet Muhammad, a controversial belief that has led to their fierce persecution, especially in South Asia, where the government has declared them to be non-Muslims.The author also explores other major claims of the Ahmadis, among them that Jesus, instead of dying on the cross, as Christians believe, or ascending in to heaven as mainstream Muslims teach, escaped from the Romans and finally settled and died in Srinagar, the capital of Kashmir, where his alleged tomb is located.

Following an account of the life of Ghulam Mirza Ahmad, the movement's founder, Valentine discusses the history of the Ahmadis, their proselytisation strategies, the role of mosques and madrasas, the position of women and the Ahmadis' doctrines of peaceful jihad