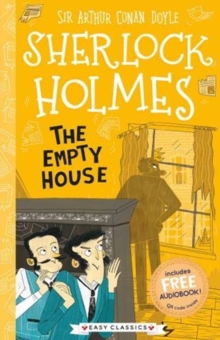 An illustrated adaptation of Sir Arthur Conan Doyle's classic Sherlock Holmes mystery - at an easy-to-read level for readers of all ages!

Also includes a QR code for the free audiobook!Mr Robert Adair was killed last night at his mansion in Park Lane.

He had spent the evening gambling and his winnings were still on the table.

His door was locked from the inside and his window was left open ... It has been three years since the death of Sherlock Holmes.

Watson is now solving mysteries solo and he's about to face his toughest one yet: the impossible murder of Mr Adair.

What Watson doesn't know is that this curious case will unearth secrets from beyond the grave ...