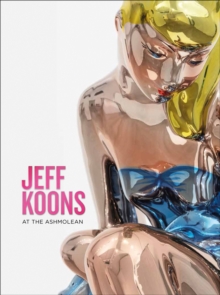 Jeff Koons is one the most famous, important, subversise and expensive artists in the world.

Here he curates a range of works from his entire career, many having never been shown in the UK.

Accompanies at exhibition at The Ashmolean, Oxford, from February to June, 2019.

Includes an interview with Jeff Koons. Features fourteen works never before shown in the UK.

New essay by Sir Norman Rosenthal. "I couldn't think of a better place to have a dialogue about art today and what it can be" - Jeff KoonsCurated by Koons himself, together with guest curator Norman Rosenthal, this show features seventeen important works, fourteen of which have never been exhibited in the UK before.

They span the artist's entire career and his most well-known series, including Equilibrium, Statuary, Banality, Antiquity and his recent Gazing Ball sculptures and paintings.

This exhibition will provoke a conversation between his creations and the history of art and ideas with which his work engages.

Jeff Koons burst onto the contemporary art scene in the 1980s.

He has been described as the most famous, important, subversive, controversial and expensive artist in the world.

From his earliest works Koons has explored the 'ready-made' and 'appropriated image', using unadulterated found objects and creating painstaking replicas of ancient sculptures and Old Master paintings which almost defy belief in their craftsmanship and precision.

Throughout his career Koons has pushed at the boundaries of contemporary art practice, stretching the limits of what is possible.