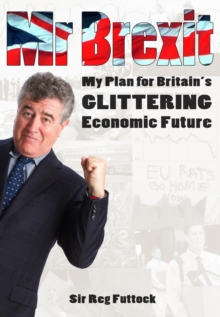 For fifty years, Sir Reginald's career has been synonymous with British business: from launching the world-beating Austin Allegro to taking RBS to the pinnacle of international banking.

Now he brings this wealth of experience to helping Britain plan for success in the post-Brexit world.

As chair of the Prime Minister's Brexit Advisory Committee, Sir Reg gives us a glimpse of Government plans for guest workers, floating universities and a US-friendly NHS.

He explains why selling the National Trust to overseas investors will promote British values and how revitalising Britain's mercenary forces will bring in much-needed hard currency.

Part-autobiography, part manifesto for a freer and less equal Britain, Sir Reg unwittingly reveals the delusions and deceits of the Brexit campaign and the doomed and fatuous 'plan' for Britain's economic future.

Mr Brexit is a must-read for all those who want to know what the future holds as Britain stands on the edge of an abyss and steps forward with confidence.