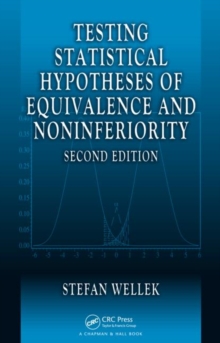 While continuing to focus on methods of testing for two-sided equivalence, Testing Statistical Hypotheses of Equivalence and Noninferiority, Second Edition gives much more attention to noninferiority testing.

It covers a spectrum of equivalence testing problems of both types, ranging from a one-sample problem with normally distributed observations of fixed known variance to problems involving several dependent or independent samples and multivariate data.

Along with expanding the material on noninferiority problems, this edition includes new chapters on equivalence tests for multivariate data and tests for relevant differences between treatments.

A majority of the computer programs offered online are now available not only in SAS or Fortran but also as R scripts or as shared objects that can be called within the R system. This book provides readers with a rich repertoire of efficient solutions to specific equivalence and noninferiority testing problems frequently encountered in the analysis of real data sets.

It first presents general approaches to problems of testing for noninferiority and two-sided equivalence.

Each subsequent chapter then focuses on a specific procedure and its practical implementation.

The last chapter describes basic theoretical results about tests for relevant differences as well as solutions for some specific settings often arising in practice.

Drawing from real-life medical research, the author uses numerous examples throughout to illustrate the methods.