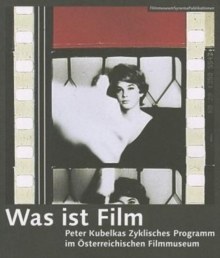 Peter Kubelka's program cycle "What is Film" is a key element in the work of the Austrian Film Museum.

It was inaugurated in 1996 on the occasion of the centenary of cinema and now consists of 63 programmes of outstanding works.

Kubelka's selection of "essential cinema" defines film as an independent art form, as a tool which cultivates new ways of thinking.

The book Was ist Film makes the cycle accessible via essays and film stills for the first time.