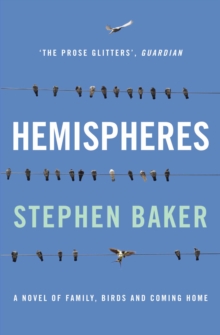 Yan is a compulsive gambler whose wanderlust leads him on a chain of adventures across the South Atlantic and beyond, in the wake of the Falklands War.

But this personal voyage takes a heavy toll on his relationships with wife Kate and teenage son Danny, left abandoned in a run-down pub on the North-East coast of England.

Despite Danny's reticence, the two men begin to reconnect through the unlikely medium of birdwatching, as Danny tries to piece together the truth about Yan's desertion and protracted homecoming. Set against the stark industrial landscapes of the Tees estuary and the wilder shores of the South Atlantic, Hemispheres is an Odyssey for the twenty-first century, a story about fathers and sons, about isolation and human connection, and - ultimately - about the healing power of the natural world.