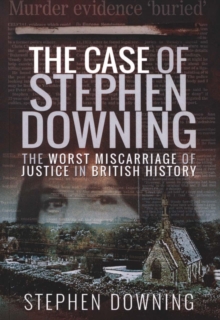 The Case of Stephen Downing : The Worst Miscarriage of Justice in British History Paperback / softback

On 12 September 1973 a seventeen-year-old na ve and vulnerable young gardener Stephen Downing returning from a short lunch break encountered the badly beaten and unconscious figure of thirty-two year old Wendy Sewell lying on the footpath of Bakewell Cemetery close to Catcliff Wood and the consecrated chapel where she had been attacked.

Stephen ran to the nearby workmen's building and in the meantime the perpetrator of the attack who had been hiding, dragged Wendy's body out of sight to a second location where she was subsequently found soon after. There then occurred a horrifying sequence of events which were to change his young life forever.

He was immediately taken into custody and questioned at length without a solicitor and eventually signed a false confession statement and Wendy was to die some two days later from her injuries. Following a very biased prosecution based three day trial during February 1974 Downing was found guilty by a jury, convicted and sentenced to what was eventually a full life sentence. Just eight months later during October 1974 there followed an appeal with fresh evidence from an eye witness who saw Wendy Sewell alive after Downing left the cemetery for lunch, however the prosecution rubbished this evidence and the appeal failed. In the many years which followed Downing's incarceration he was moved from prison to prison, continuing to maintain his innocence and in doing so jeopardised any chance of parole as he was In Denial Of Murder until eventually his plight reached journalist Don Hale, whose tireless efforts eventually led to a Criminal Cases Review and appeal in which Downing was released as a middle aged man after some twenty-seven years, the longest miscarriage in the United Kingdom legal history.