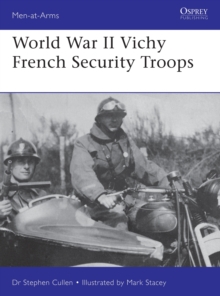 After the Fall of France in 1940, a new puppet state was set up in the south.

Officially known as the French State, it is better known as Vichy France.

This collaborationist Vichy regime's armed forces were more active and usually more numerous than German troops in the task of hunting down and crushing the maquis - the French Resistance guerrilla forces This book will cover the organization and operations of Vichy French Security Forces, including: the new Vichy Police Nationale, particularly their Groupes Mobiles de Reserve, the Service d'Ordre Legionnaire , and the Milice Francaise, a ruthless anti-Resistance militia armed partly with British weapons captured from SOE airdrops.

Fully illustrated throughout with contemporary photographs and commissioned artwork, it tells the story of Occupied France from the perspective of those who sought to keep it in German hands.