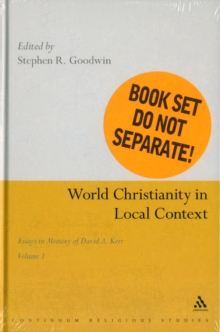 World Christianity in Local Context and Muslim Encounter : Essays in Memory of David A. Kerr Hardback

"World Christianity in Local Context and Muslim Encounter" is a unique collection of essays in honour of David A.

Kerr, who was well-known for his contributions in the areas of Christian-Muslim dialogue, Ecumenical Studies and Missions.

With contributions from recognised experts in these fields, the book provides a platform for examining critical issues facing twenty-first century Christianity, with a special emphasis on contemporary Christian-Muslim relations.In Volume 1, scholars and church leaders offer insights into current trends in Local Theology and Missions from the contexts of Asia, Africa, Latin America and Europe.

Contemporary themes explored in this volume include the mission for the Church in the context of economic globalization, post-Christendom and pluralism in the West, a Chinese theology of suffering and social responsibility, Latin America as an emerging mission base, and others.Volume 2 is a veritable Who's Who of renowned Christian and Muslim scholars that have shaped the course of Christian-Muslim dialogue over the last half century. Their contributions in this volume address the pivotal issues facing Christians and Muslims today, such as Islamism, Islamophobia, Dialogue and Religious Truth Claims in Christianity and Islam, Religious Freedom, Inter-Religious Challenges to Urban Multiculturalism and others.