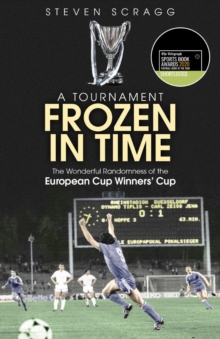 A Tournament Frozen in Time : The Wonderful Randomness of the European Cup Winners Cup Paperback / softback

While the European Champions' Cup was for the high achievers and the UEFA Cup was where the cool kids often hung out, the Cup Winners' Cup threw its own uniquely eccentric shapes.

The random nature of domestic cup success was what gained entry to the tournament and this brought a richer diversity of competitor than its more celebrated counterparts.

A trophy which eluded the clutches of European royalty such as Real Madrid, Liverpool and Inter Milan, it remains the only European honour of both Paris Saint-Germain and Manchester City, despite their contemporary financial advantages.

The tournament which immortalised the likes of Magdeburg and Dinamo Tbilisi, it gave English football its first ever European glory.

This is the story of the European Cup Winners' Cup.