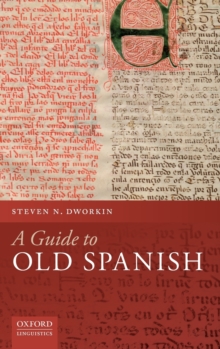 A Guide to Old Spanish Hardback

This book is a general introduction to the structures of the different medieval Romance vernaculars most commonly known as Old or Medieval Spanish, as preserved in texts from Spain from the eleventh to the fifteenth centuries.

After discussing general methodological questions concerning the description and analysis of an earlier historical stage of a modern language, the individual chapters in the first part of the book describe the orthography, phonetics andphonology, morphology, syntax, and vocabulary of medieval Hispano-Romance. Steven N. Dworkin offers the first systematic description of the language in English, and compares its structures with those found in the modern variety.

In the second part of the book, the features of medieval Hispano-Romance areexemplified in an anthology of selected texts, one from each of the thirteenth, fourteenth, and fifteenth centuries, accompanied by linguistic commentary.

The volume will be of interest to scholars and students of Romance linguistics, Spanish historical linguistics, and Spanish medieval literary and cultural studies.