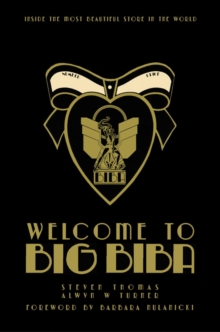 Welcome to Big Biba: Inside the Most Beautiful Store in the World Hardback

Big Biba, the final flowering of Barbara Hulanicki's legendary Biba store in London, was a shop like no other, before or since.

It was a fabulous fantasy palace that brought the indulgence of Hollywood to the world of retail.

Big Biba lasted just two years before it fell victim to recession, but the myth of the most beautiful store in the world continues to enchant both its former habitues and those who came to it too late. Founded as a corner-shop selling just one dress, Biba had grown in less than a decade to become a seven-storey department store filled with own-brand products throughout.

Here the committed Bibaphile could buy not only a new wardrobe, fully co-ordinated from head to toe, but also a complete range of cosmetics and soft furnishings, together with the washing powder to care for her clothes, and food for both herself and her pets, all presented in the distinctive Biba packaging. Alternatively she could just hang out, either lounging in the shop-windows (Biba didn't do window-displays), or sipping cocktails upstairs amongst the flamingos that lived in the Roof Garden, or in the Rainbow Room, where on a good night there might be a live performance by the likes of the New York Dolls, Liberace or The Manhattan Transfer. Welcome to Big Biba is the first book dedicated entirely to this dreamland, with over 150 colour photographs - most published here for the first time - of the store and of the products and graphics created for the various departments, from bathrooms to ball-gowns, from cosmetics to colouring-books. Styled by Steven Thomas, the designer of Big Biba itself, and with text by Alwyn W Turner, author of The Biba Experience, this book evokes the glamour, humour and fantasy of the store, the audacious style that could turn a shop girl into a Hollywood star.