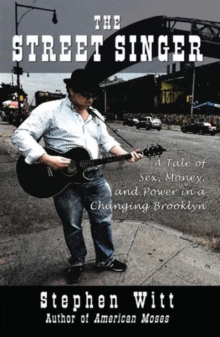 "The gonzo story of Brooklyn's Barclays Arena and an NBA team coming to Brooklyn by the journalist who played a pivotal role in making it happen. The Street Singer follows flat-broke subway musician, Jason Spirit, as he stumbles into contact with high-powered developer Thaddeus Hoover - a thinly-veiled take on developer Bruce Ratner.

Spirit ends up playing project supporters and opponents against each other in order to get a song he's written to rapper BScott - a take on Brooklyn Nets minority owner Jay-Z. This is a novel about sex, money and power in a changing Brooklyn, a musical and often humorous take on present day NYC, complete with Russian oligarchs, blogger journalists, gentrification, poverty, celebrity adulation and basketball. An America discovering a new paradigm of global captitalism, with a reinvented Brooklyn at its core."