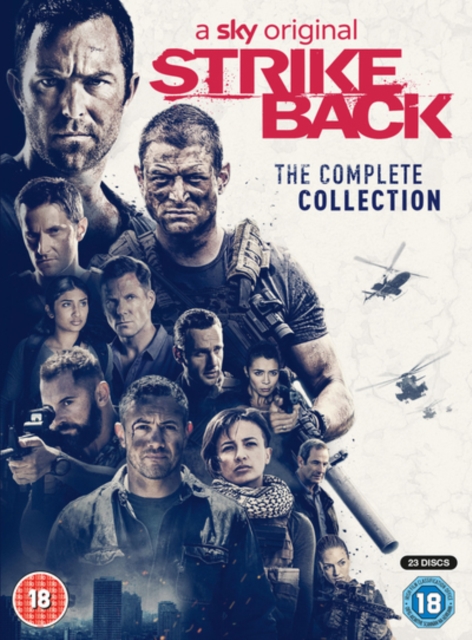 Strike Back: The Complete Collection DVD

All 76 episodes of the action drama series based on the novel by former Special Forces operative Chris Ryan.

The second series, 'Project Dawn', follows the efforts of Section 20 agents Michael Stonebridge (Philip Winchester) and Damien Scott (Sullivan Stapleton), as they try to put an end to an international terrorist group after Porter is kidnapped.

The third series, 'Vengeance', finds Section 20 in Africa trying to stop billionaire Conrad Knox (Charles Dance) who aims to use stolen Libyan nuclear devices to further his plans for domination.

In the fourth series, 'Shadow Warfare', following the execution of a Section 20 operative in Lebanon by Leo Kamali (Zubin Varla), a member of Al-Zuhari's terrorist organisation, Scott and Stonebridge travel to Colombia to try and take him alive.

In the fifth series, 'Legacy', Section 20 continue their globetrotting military missions as Sgts.

Stonebridge and Scott travel to Thailand to find the kidnapped daughter of the British ambassador where they are caught up in a plot to bomb the embassy.

After a North Korean general dies in the blast, Stonebridge and Scott investigate the covert crime syndicate known as Office 39 who planned the attack to provoke a North Korean war with the West.

Reunited, they go after an escaped terrorist who is believed to be planning another attack.

In the seventh series, 'Silent War', McAllister, Wyatt and Lance Corporal Novin (Alin Sumarwata) are tasked with investigating the murder of an undercover British soldier in Malaysia.

Their globetrotting mission leads them to join forces with a Russian operative in search of a stolen nuclear warhead before it falls into the wrong hands and sparks a global nuclear war.

In the final series, 'Vendetta', Section 20 is on a mission to recover a British scientist held hostage by the Albanian mafia when they learn of a terrorist plot involving a weaponised virus.

As they attempt to recover the bioweapon, created by the British, they discover a more dangerous terrorist threat in the form of two jihadist brothers.