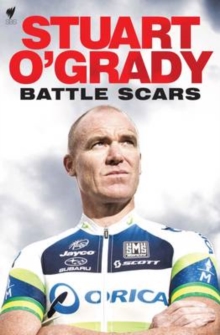 Stuart O'Grady is one of Australia's best-loved cyclists with a long and successful career in cycling for Australia and as a professional road cyclist.

The record holder for most starts in a Tour de France ever, as well as an Olympic gold medallist and winner of the Green Jersey on four occasions, O'Grady is one of cycling's most respected stars.

But in 2013, following his retirement, Stuart made a shock announcement: he had used EPO, a performance enhancing drug, in the 1998 Tour de France.

For a cyclist renowned for his strength and determination, this was a shocking blow to his reputation and his hard won legacy.

Starting his career as a teenager O'Grady worked tirelessly to rise to the top of elite cycling.

Known as 'Mr Indestructible', he fractured eight ribs, a shoulder blade, collarbone, three vertebrae and punctured his right lung - all in one Tour de France.

His never-say-die attitude has inspired people everywhere and he is a true hero to anyone who has enjoyed The Tour over the past two decades. Recounting his incredible 20 year career including 17 Tour de France starts, Battle Scars recounts the highs and lows of Stuart's cycling journey, including the culture in elite international cycling and the pressure on young teenage cyclists to perform, which led to his now infamous choice to take performance enhancing drug EPO in 1998.

But in this up-front and honest autobiography Stuey reveals more than just headlines.

From growing up in a talented cycling family and starting a training diary at age 13, to his career success in the velodrome, and his eventful years as a professional road cyclist, his style is absolutely candid, down-to-earth and genuine.

Stuart O'Grady is an inspirational but very human sports hero, and Battle Scars is an enthralling read for anyone interested in elite sport.