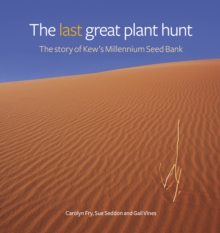 As humans adapt to a changing climate and planet, there is a pressing need for wild plant seed banks, and an urgent effort to conserve all plant diversity.

The largest seed bank of its kind in the world dedicated to wild plant species, it contains the world's most diverse seed collections.

Over the past 10 years more than 3.5 billion seeds from nearly 25,000 species have been collected and stored in seed banks both in their country of origin and in Kew's Millennium Seed Bank.