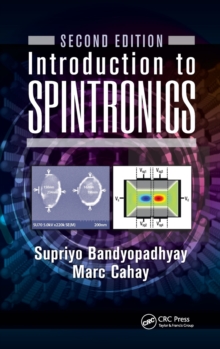 Introduction to Spintronics provides an accessible, organized, and progressive presentation of the quantum mechanical concept of spin and the technology of using it to store, process, and communicate information.

Fully updated and expanded to 18 chapters, this Second Edition:Reflects the explosion of study in spin-related physics, addressing seven important physical phenomena with spintronic device applicationsDiscusses the recently discovered field of spintronics without magnetism, which allows one to manipulate spin currents by purely electrical meansExplores lateral spin-orbit interaction and its many nuances, as well as the possibility to implement spin polarizers and analyzers using quantum point contactsIntroduces the concept of single-domain-nanomagnet-based computing, an ultra-energy-efficient approach to compute and store information using nanomagnets, offering a practical rendition of single-spin logic architecture ideas and an alternative to transistor-based computing hardwareFeatures many new drill problems, and includes a solution manual and figure slides with qualifying course adoptionStill the only known spintronics textbook written in English, Introduction to Spintronics, Second Edition is a must read for those interested in the science and technology of storing, processing, and communicating information via the spin degree of freedom of electrons.