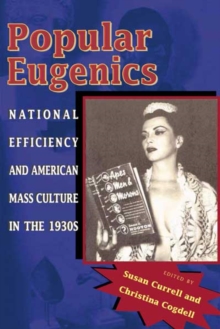 The motto "Eugenics is the self-direction of human evolution" was part of the logo of the Second International Congress of Eugenics, held in 1921.

However, by the 1930s, the disturbing legacy of this motto had started to reveal itself in the construction of national identities in countries throughout the world.

Popular Eugenics is a fascinating look at how such tendencies emerged within the rhetoric, ideology, and visual aesthetics of U.S. mass culture during the 1930s, offering detailed analysis of the way that eugenics appeared within popular culture and images of modernity, particularly during the Depression era. The essays in this generously illustrated collection demonstrate how, after the scientific foundations of the eugenics movement had been weakened in the 1930s, eugenic beliefs spread into the popular media, including newspapers, movies, museum exhibits, plays, and novels, and even fashion shows and comic strips. Popular Eugenics shows that eugenic thought persisted in science and culture as well as in social policy and goes a long way toward explaining the durability of eugenic thinking and its effects on social policy in the United States. Popular Eugenics will be of interest to scholars and students in a broad range of disciplines, especially American literature and history, popular culture, media studies, and the history of science.