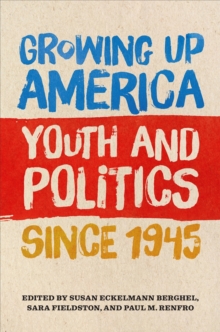 Growing Up America : Youth and Politics since 1945 Paperback / softback

Growing Up America brings together new scholarship that considers the role of children and teenagers in shaping American political life during the decades following the Second World War.

Growing Up America places young people-and their representations-at the center of key political trends, illuminating the dynamic and complex roles played by youth in the midcentury rights revolutions, in constructing and challenging cultural norms, and in navigating the vicissitudes of American foreign policy and diplomatic relations. The authors featured here reveal how young people have served as both political actors and subjects from the early Cold War through the late twentieth-century Age of Fracture.

At the same time, Growing Up America contends that the politics of childhood and youth extends far beyond organized activism and the ballot box.

By unveiling how science fairs, breakfast nooks, Boy Scout meetings, home economics classrooms, and correspondence functioned as political spaces, this anthology encourages a reassessment of the scope and nature of modern politics itself.