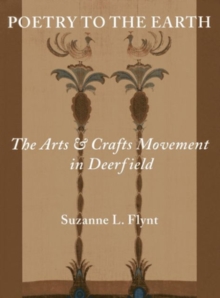 Poetry to the Earth : The Arts & Crafts Movement in Deerfield Hardback

Suzanne Flynt, curator of Memorial Hall Museum, has authored the story of this beautiful Massachusetts town that shows how Deerfield played a pivotal role in the American Arts and Crafts movement.

The artistic and intellectual atmosphere of Deerfield, combined with its colonial history and picturesque surroundings, created an ideal environment for introducing the Arts and Crafts, a movement that encouraged a return to hand craftsmanship, simplicity of design, and honesty of materials.

Wide-reaching audiences in cities such as New York, Boston, Chicago, and San Francisco acknowledged the standard of excellence Deerfield craftsmen achieved in design, materials, and workmanship.