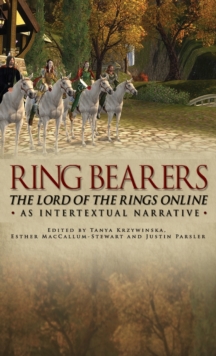 Ringbearers : *The Lord of the Rings Online* as Intertextual Narrative Hardback

Ringbearers collects together essays by established and leading figures within Game Studies, each focused on different aspects of the Massively Multiplayer Online game The Lord of the Rings Online.

The authors played the game extensively, yet they each come to it with different questions.

Some essays focus on what players do with and in the game, whether that means asking about the opportunities provided for role-play or asking how the knowledge that fans bring to the game informs their experience of it.

Others focus on the design of the game: for example the handling of narrative and its temporal dimensions, the articulation of core themes into ludic form, or the representational and aural strategies used.

Moral rhetorics solicit discussion from various perspectives, as does the treatment of horror and the 'other'.

Particular game mechanics are analysed in detail such as the game's crafting economy, or, more generally, the development of improbable conventions that players have learned to accept as the grammar of games.

As well as Design, Media and Game Studies students and scholars, Ringbearers will also prove of interest to those studying adaptation and to scholar-fans of JRR Tolkein's massively influential and popular fictional work. -- .