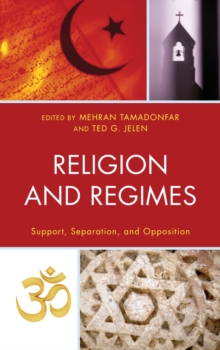 This work is a collection of essays that describe and analyze religion and regime relations in various nations in the contemporary world.

The contributors examine patterns of interaction between religious actors and national governments that include separation, support, and opposition.

In general, the contributors find that most countries have a majority or plurality religious tradition, which will seek a privileged position in public life.

The nature of the relationship between such traditions and national policy is largely determined by the nature of opposition.

A pattern of quasi-establishment is most common in settings in which opposition to a dominant religious tradition is explicitly religious.

However, in some instances, the dominant tradition is associated with a discredited prior regime, in which a pattern of legal separation is most common.

Conversely, in some nations, a dominant religion is, for historical reasons, strong associated with national identity.

Such regimes are often characterized by a "lazy monopoly," in which the public influence of religion is reduced.