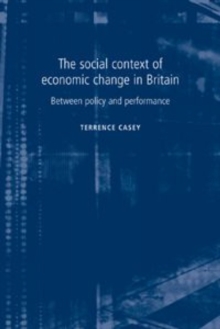 The Social Context of Economic Change in Britain : Between Policy and Performance Paperback / softback

This important book, newly available in paperback, examines a period of dramatic economic change in Britain during the Thatcher era.

The Conservatives' free market policies generally improved the performance of the economy in Britain, but some parts of the country still did poorly (for example northern England).

Casey argues that this was as a result of variations in social contexts - a combination of institutions, interests and economic culture.

Southern England, possessing a more individualistic culture and higher levels of entrepreneurialism, has a 'market responsive' social context that can prosper under free market policies.

Social context is thus a crucial intervening variable between the policies selected by decision-makers and the performance of economies, the key for enhancing prosperity is the proper match between economic policies and the context in which they are implemented. The social context of economic change in Britain provides an original theoretical framework linking economic growth and civil society and offers a unique insight into the Thatcher era.

This book will be of interest to students of British politics and comparative political economy, public policy and political history. -- .