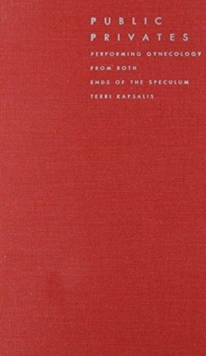 Public Privates : Performing Gynecology from Both Ends of the Speculum Hardback

In Public Privates, a book about looking and being looked at, about speculums, spectacles, and spectators, about display, illumination, and reflection, Terri Kapsalis makes visible the practices and representations of gynecology.

The quintessential examination of women, gynecology is not simply the study of women's bodies, but also serves to define and constitute them.

Any critical analysis of gynecology is therefore, as Kapsalis affirms, an investigation of what it means to be female.

In this respect she considers the public exposure of female "privates" in the performance of the pelvic exam.

From J. Marion Sims's surgical experiments on unanesthetized slave women in the mid-nineteenth century, to the use of cadavers and prostitutes to teach medical students gynecological techniques, Kapsalis focuses on the ways in which women and their bodies have been treated by the medical establishment.

Removing gynecology from its private cover within clinic walls and medical textbook pages, she decodes the gynecological exam, seizing on its performative dimension.

She considers traditional medical practices and the dynamics of "proper" patient performance; non-traditional practices such as cervical self-exam; and incarnations of the pelvic examination outside the bounds of medicine, including its appearance in David Cronenberg's film Dead Ringers and Annie Sprinkle's performance piece "Public Cervix Announcement." Confounding the boundaries that separate medicine, art, and pornography, revealing the potent cultural attitudes and anxieties about women, female bodies, and female sexuality that permeate the practice of gynecology, Public Privates concludes by locating a venue from which challenging, alternative performances may be staged. 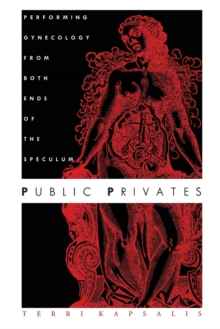