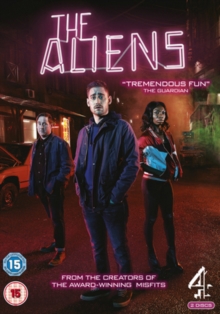 All six episodes of the BBC comedy drama. Having crash-landed on Earth 40 years ago, a group of aliens, who look, sound and behave just like humans, live uneasily alongside normal society in the ghetto known as Troy.

Having failed to integrate into society the aliens are marginalised and forced to live in the violent ghetto where gangs rule and crime runs rampant.

Border guard Lewis Garvey (Michael Socha) is unsympathetic to the alien's plight but that all changes when he falls in love with gang leader Lilyhot (Michaela Coel) and discovers that he is half-alien.

With Lilyhot's help, Lewis seeks out his real father, Antoine (Michael Smiley), and convinces him to try and take back control of Troy from Fabien (Trystan Gravelle).