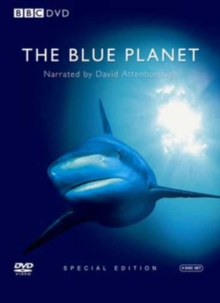 Box set containing the complete BBC natural history series examining life beneath the world's oceans. 'The Blue Planet' presents an overview of the programmes to come, offering a sense of the amazing variety and complexity of the underwater kingdom. 'The Deep' explores the deepest depths of the oceans and looks at the predators which live there. 'Open Ocean' examines the stretches of deserted sea where very little life can be found, except some of the most dangerous predators of all.

In 'Frozen Seas' life in the Arctic seas is compared with life in the Antarctic. 'Seasonal Seas' looks at the way the sun effects the marine environment in the temperate seas. 'Coral Seas' examines the way coral reefs are formed, the life which flourishes among them, and the destruction which ultimately comes their way.

In 'Tidal Seas' the series examines tidal movements and their effect upon marine life. And finally 'Coasts' looks at the way underwater life uses the regions above the tide line, a habitat which holds few indigenous species but plays host to many visitors.

Also included are two special episodes: 'Making Waves', a look at some of the characters who helped bring the series to the screen; and 'Deep Trouble', an investigation of man's relation to the sea.