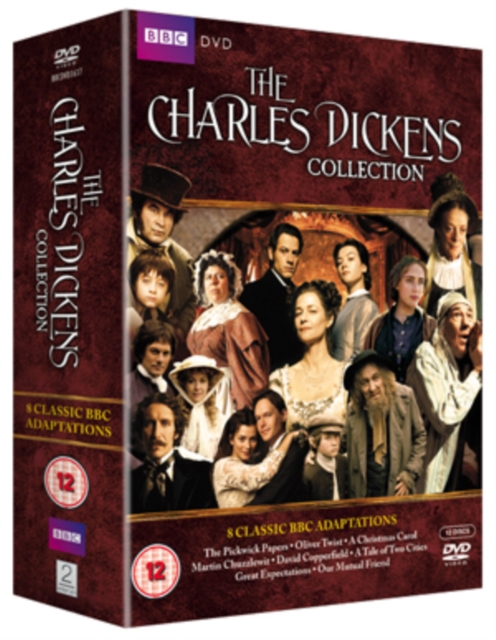 In 'Martin Chuzzlewit' (1994), old Mr Chuzzlewit (Paul Scofield) is on his death bed, and surrounded by his money-hungry family jostling for a position in his will.

In 'Oliver Twist' (1985), Ben Rodska plays the orphan who falls in with the pickpocket Fagin (Eric Porter) and his band of thieving boys, as well as crossing paths with the villainous Bill Sykes (Michael Attwell).

In 'A Christmas Carol' (1977), miserly Ebenezer Scrooge (Michael Hordern) says humbug to Christmas, before three ghosts show him his past, present and possible future, if he doesn't mend his evil ways.

When Charles is caught up in the terrors of the French Revolution, Carton risks everything to rescue the husband of the woman he loves.

In 'Great Expectations' (1999), Ioan Gruffudd plays orphan Pip, helped to become a gentleman in society by a mysterious benefactor.

Thinking that he is being groomed by the reclusive and bitter Miss Havisham (Charlotte Rampling), Pip is shocked to find that his benefactor is the vicious convict Magwitch (Bernard Hill), who Pip helped escape from the Essex marshes when he was a boy.

In 'David Copperfield' (1999), the titular hero (played as a young boy by Daniel Radcliffe) progresses through an uncertain life, helped along the way by debtor Mr Micawber (Bob Hoskins) and his aunt Betsy (Maggie Smith).

By the time David grows up (played by Ciaran McMenamin), he decides to make a better life for himself.

In 'The Pickwick Papers' (1985), Nigel Stock stars as the founder of the Pickwick Club, undergoing many eccentric and chaotic adventures.

Finally, in 'Our Mutual Friend' (1998), an adaptation of Dickens' darkest book, a mysterious death by the banks of the Thames links the lives of two young women, Lizzie Hexam (Keeley Hawes) and Bella Wilfer (Anna Friel).