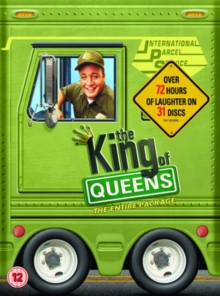 The King of Queens: The Entire Package DVD

All nine series of the popular US sitcom about a beleaguered courier driver and his family.

Doug and Carrie Heffernan are a young Queens couple who should be sitting pretty.

Doug (Kevin James) is a courier driver with a cheeky, playful nature who, given a choice, almost always chooses what's most likely to rile his wife's fiery temper.

Carrie (Leah Remini) is a legal assistant, vivacious, wise, and, on the face of it, way too good for Doug - a fact that informs much of the comedy here.

In the first flush of their married life together, however, Carrie's parents' house burns down.

Her mum dies, and dad Arthur needs a place to stay. Arthur (Jerry Stiller) is an oddball, hilariously volatile old man who never says anything that isn't in anger or indignation.

An ensemble of Doug's quirky friends, who constantly dispense advice he takes to heart but which is utterly, disastrously wrong, round out the cast in this long-running family comedy.