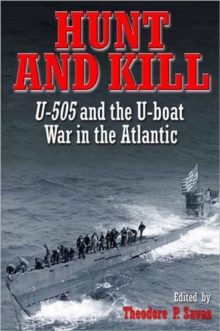 Hunt and Kill : U-505 and the U-Boat War in the Atlantic Paperback / softback

The top secret seizure of this massive Type IX submarine provided the Allies with priceless information on German technology and innovation.

After the war, U-505 was transported to Chicago, where today several hundred thousand visitors a year pass through its well-preserved hull at the Museum of Science and Industry. Now in paperback, Hunt and Kill offers the first definitive study of U-505.

Chapters include her construction, crew and commanders, combat history, an assessment of Type IX operations, naval intelligence, the eight fatal German mistakes that doomed the ill-fated boat, her capture, and final transportation and restoration for posterity. The contributors to this fascinating volume - a Who's Who of U-boat historians - include: Erich Topp (U-552, Odyssey of a U-boat Commander); Eric Rust (Naval Officers Under Hitler); Timothy Mulligan (Neither Sharks Nor Wolves); Jak Mallmann Showell (Hitler's U-boat Bases); Jordan Vause (Wolf); Lawrence Patterson (First U-boat Flotilla); Mark Wise (Enigma and the Battle of the Atlantic); Keith R.

Gill (former Curator, U-505, Museum of Science and Industry), and Theodore P.