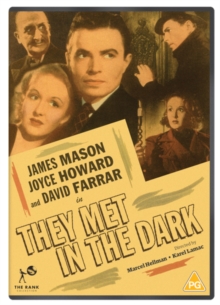 They Met in the Dark DVD

Having been set up by an enemy agent, Heritage is attempting to track her down in order to prove his innocence in the subsequent suit brought against him.

When he discovers the agent's dead body, he is at first presumed to be her killer by Laura Verity (Joyce Howard), who happens to appear on the scene of the crime shortly after Heritage.

They soon realise, however, that they are both embroiled in the schemes of a Nazi spy ring, led by Christopher Child (Tom Walls).