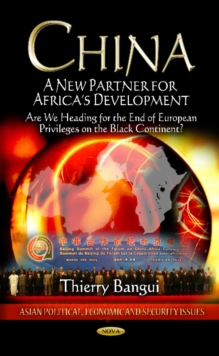 China : A New Partner for Africa's Development - Are We Heading for the End of European Privileges on the Black Continent? Hardback

With a few notable exceptions, articles and books on the Chinese-African relationship are produced by Western authors and they are founded on relatively similar analyses, slamming together the varied actions of China on the African continent, and reaching similar, inevitable conclusions.

This book is, in contrast, a new take on Sino-African cooperation.

This book analyzes the reasons for the renewed interest in Africa and its economic, political and diplomatic effects.

This book, which is meant to provide a new perspective for the general public, is fed by an extensive bibliography and targeted interviews with people from many walks of life: businessmen, politicians, heads of government, academia and citizens.