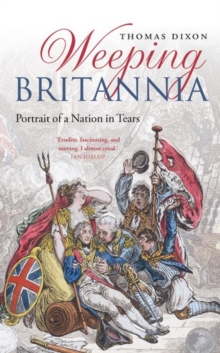 Weeping Britannia : Portrait of a Nation in Tears Paperback / softback

There is a persistent myth about the British: that we are a nation of stoics, with stiff upper lips, repressed emotions, and inactive lachrymal glands.

Weeping Britannia - the first history of crying in Britain - comprehensively debunks this myth.

Far from being a persistent element in the 'national character', the notion of the British stiff upper lip was in fact the product of a relatively brief and militaristic period of our past, from about 1870 to 1945.

In earlier times we were a nation of proficient, sometimes virtuosic moral weepers.

To illustrate this perhaps surprising fact, Thomas Dixon charts six centuries of weeping Britons, and theories about them, from the medieval mystic Margery Kempe in the early fifteenth century, toPaul Gascoigne's famous tears in the semi-finals of the 1990 World Cup.

In between, the book includes the tears of some of the most influential figures in British history, from Oliver Cromwell to Margaret Thatcher (not forgetting George III, Queen Victoria, Charles Darwin, and Winston Churchill alongthe way).

But the history of weeping in Britain is not simply one of famous tear-stained individuals.

These tearful micro-histories all contribute to a bigger picture of changing emotional ideas and styles over the centuries, touching on many other fascinating areas of our history.

For instance, the book also investigates the histories of painting, literature, theatre, music and the cinema to discover how and why people have been moved to tears by the arts, from the sentimental paintings and novels ofthe eighteenth century and the romantic music of the nineteenth, to Hollywood weepies, expressionist art, and pop music in the twentieth century.

Weeping Britannia is simultaneously a museum of tears and a philosophical handbook, using history to shed new light on the changing nature of Britishness over time, as well as the ever-shifting ways in which we express and understand our emotional lives.

The story that emerges is one in which a previously rich religious and cultural history of producing and interpreting tears was almost completely erased by the rise of a stoical and repressed British empire in the late nineteenthcentury.

Those forgotten philosophies of tears and feeling can now be rediscovered.

In the process, readers might perhaps come to view their own tears in a different light, as something more than mere emotional incontinence.